Well, today is something a bit different. I thought I’d show you a picture of my whiteboard near the start of class.
The students were answering the question on the main part of the board. We came upon one of the trickiest sets of loanword-versus-usage problems. Also there were a couple of issues with “(a pair of) THINGs” that is really a pluralised single item. 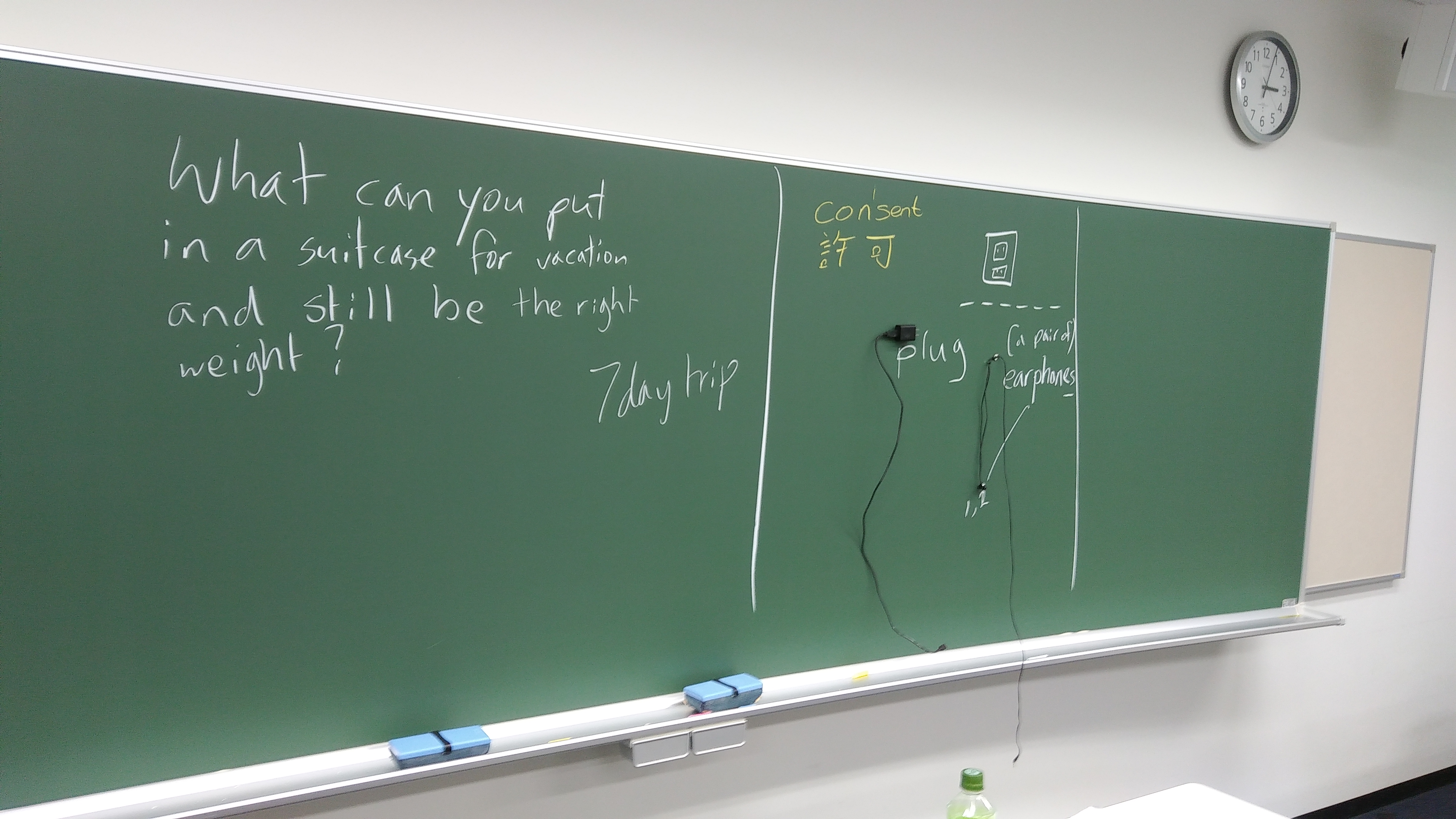 Luckily I had some really with me. I would have loved to pull the socket of the wall, too.
I almost always have Print Tack (or くつきむし [kutsukimushi] in Japanese) with me. It’s what I use for reading/picture gallery tasks, too.
Do you use the whiteboard or blackboard for anything a bit different? 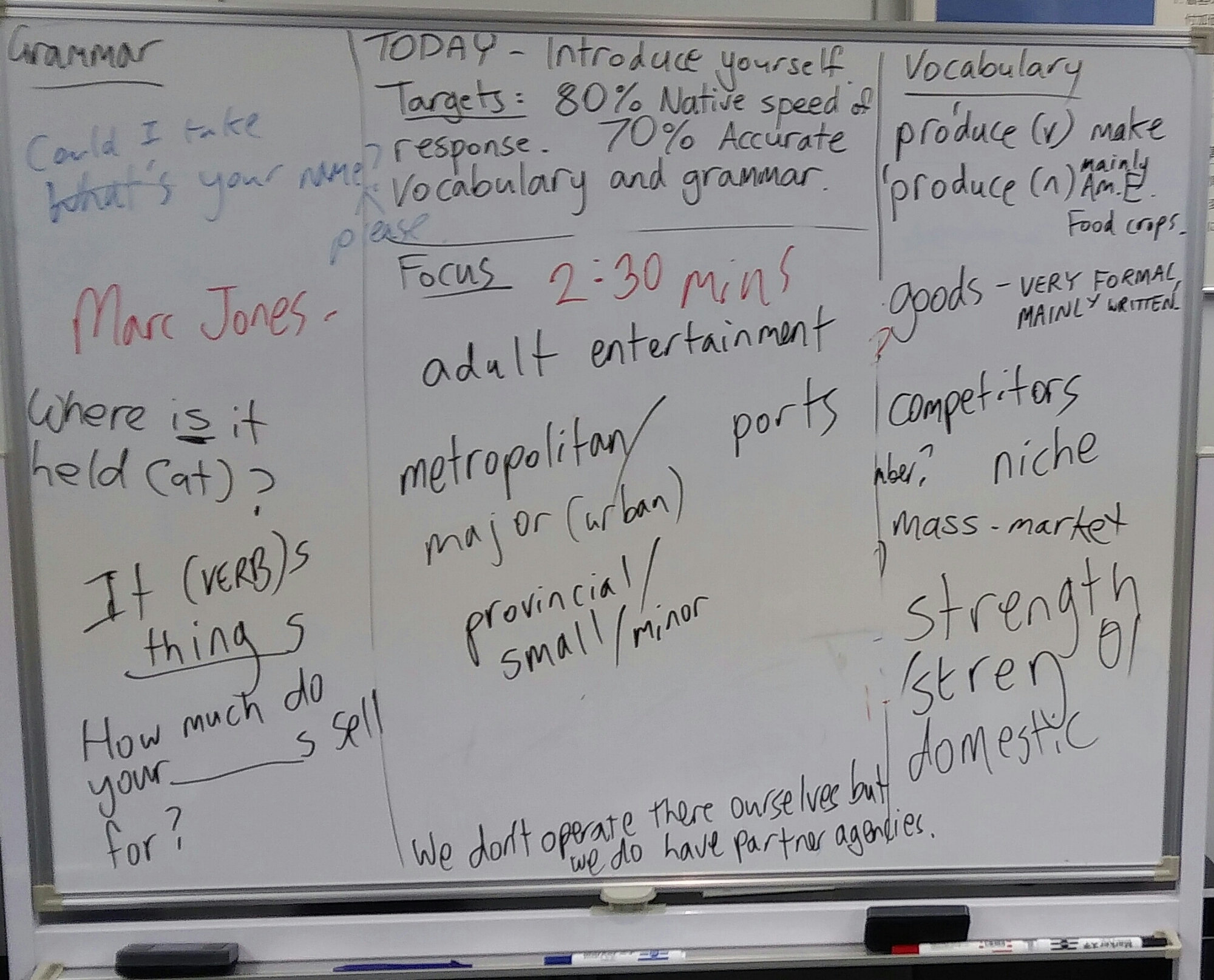 This whiteboard was for the second lesson of a course I am teaching based on Business Result Pre-Intermediate. The learners are six men at a logistics company.
The flow
Check homework from the Practice File (gap fills for vocabulary review).
First up was a game at the end of the chapter based on questions and answers. It gave me a chance to check question formation and adjacency pairs (speech acts that go together).
I was going to move on to ‘eavesdrop’ upon the listening on the previous page and transcribe the conversation with half the class transcribing the man and half transcribing the woman. I thought that the game went on too long to do the textbook listening so I moved on to the speaking activity.
The speaking activity was the task at the top of the board:Introduce yourself; Targets: 80% native speed of response, 70% accurate vocabulary and grammar. They had to introduce their company, too. Matthew asked why I chose these targets. I figure that an introduction is really easy but an introduction with parameters close to what would be acceptable on business, generally, would be closer to the ‘real world’ and encourage more involvement than a task with no parameters.
Kamila asked how I measure the speed. Basically, I wait till the preceding utterance finishes, mentally answer and count two beats from my point of answering. It sounds harder than it is.
How I set it up was in threes, too talk one transcribes the first speaker only. This was to build accuracy in the first speaker. I read about it in this article by Skehan and Foster.  In the article, learners transcribed themselves but in this risk they transcribed each other. Conversations carried on for around seven minutes. I followed up with a focus on form. These were mainly about vocabulary or body language and a little bit on question formation with final prepositions. Advice was given based on the transcription and then the task was repeated. I then followed with pairs repeating a similar task but with a 2 min 30 sec time limit. The companies they chose to talk about were all fictionalised, hence ‘adult entertainment’. Homework set was a gap fill with ‘you’ or ‘I’ in questions.
It went well, particularly with the weaker students in the class. Some things I wish I’d done were getting the students to record each other in pairs then transcribe themselves. This ended up being the end of the next lesson (make a podcast section to give an introduction to your company)  and homework (transcribe yourself, noting mistakes or things you would change if you did it again). Overall the lesson was quite good but I still am not totally satisfied. Maybe this is because I am still trying to figure out my rapport and how we gel. Maybe I feel it was a bit repetitive, though it was kind of a fun time.