I have a class on Thursdays that have really let me get my teeth into needs analysis with them. It’s the first time I’ve taught a class and had ‘What do you need to learn?’ answered with something other than ‘English.’
One of my learners told me that a situation we did as an extended task has taken on even more relevance, seeing as he’s going to Europe with two classmates at the end of November.
The thing is, that task wasn’t in the book. It wouldn’t have been on the syllabus at all had I not performed a needs analysis through a class discussion on training and completing a task to analyse linguistic needs.
OK, Marc, so what’s that got to do with anything?
Well, if we have a look at the set texts, and then have a look at the needs analysis then we get to the stage where a Venn diagram or suchlike would be useful. Where is the overlap between the textbook and the needs. Ideally, the people in charge of selling the course would have nothing to do with choosing (or foisting) textbooks. After a needs analysis teachers should be able to see what they need to teach and then look to see what textbook, if any, best meets the needs of the class. What resources need to be gathered? There will always be other things cropping up in lessons that will require divergence and detours from the main syllabus but if the basics are down, everything else that needs to be rejigged on the fly can be done with a minimum of fuss.
However, if you’re working to a pacing of book pages determined by someone outside the classroom who doesn’t know the learners, whose needs are you meeting? Theirs, but their needs are only wants, and those wants shouldn’t matter.

I don’t know whether many teachers are really concerned about what goes on in other teachers’ classrooms. I am, but then I’m nosy. I want to know what their cool ideas are. I want to steal!
That said, I’m not indiscriminate. I want to steal good stuff that I think will work with my learners. In that case, why do I have people in my personal learning network (PLN) based in across the world, when I’ve said before that learning can’t be generalised?
Because I want to get ideas about flow. Because an idea that won’t work for me makes me think about why it won’t work and what I need to do in order to make it work. It’s part of the reason I set up the Tokyo Lesson Jam, which is way overdue another meeting (December, when I finish my DipTESOL?), so that I could steal other people’s cool stuff.
For those of us who never get to do peer observations, reading lesson plans on blogs is like a glimpse into another teacher’s classroom. You get to say ‘I wouldn’t do that, I’d do this‘ (in a nice way, not a smart-arsed way). You might even say it in the comments of the blog. You might also see how somebody else solved a problem that you’re working on, or tried unsuccessfully to solve it. The internet is the easiest way to join a community of practice and people are welcoming. People will still say that your stupid ideas are stupid, but they will often say so nicely. They will then give you a better idea. If an idea or method should be rejected, you’ll be told why, and if anything usable can be salvaged from the wreck.
So, yes, even if my stupid lessons wouldn’t work for your learners, it can still be useful provided you give the reasons why it wouldn’t.

I did the graph idea from the TBLT ELT ideas board today and it went well, with a couple of changes. 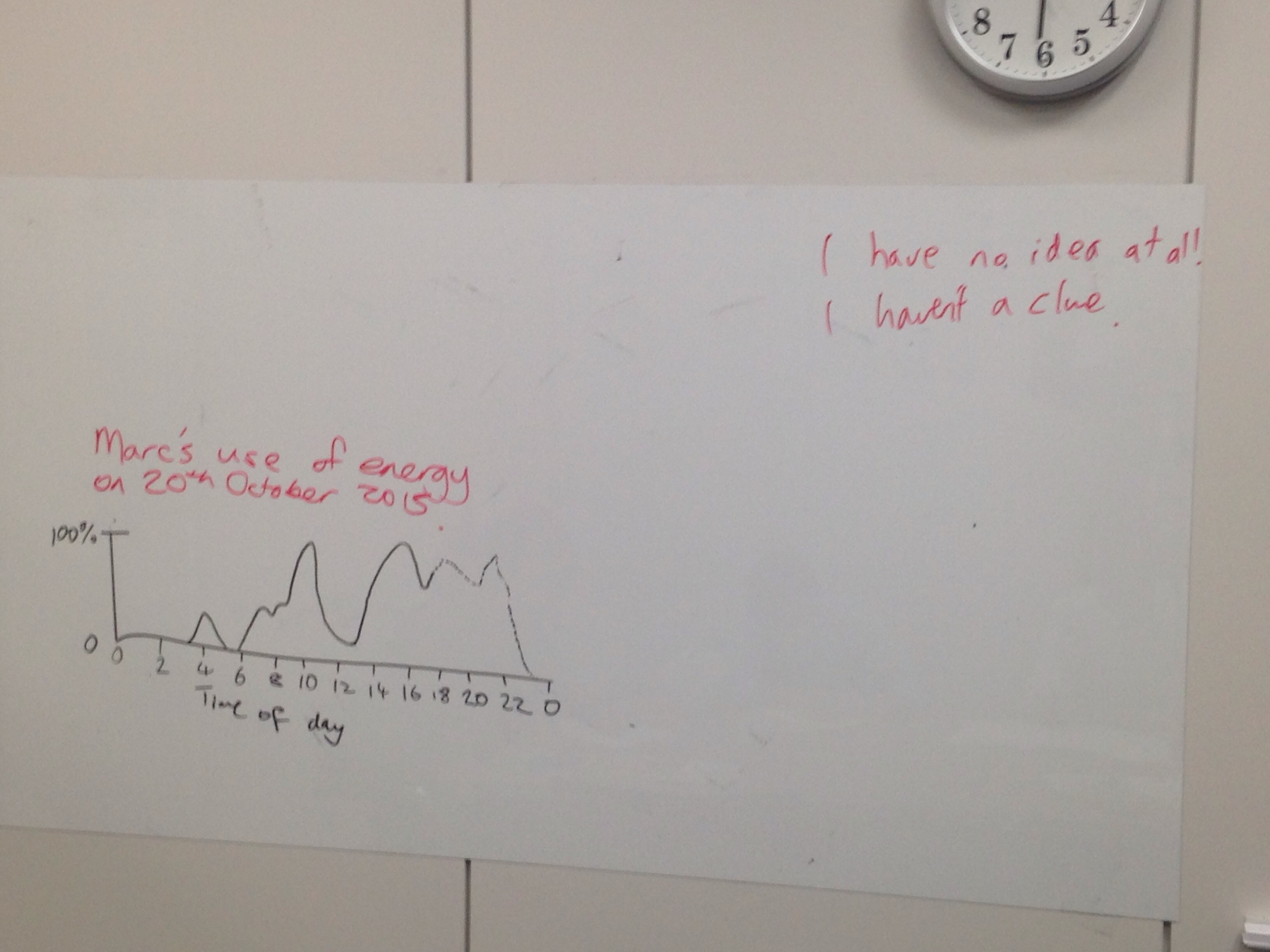 I drew a graph to show my own energy expended over the day and first had the learners speculate about what the graph was. (Hence the phrases on the right).
They came close by guessing sleep had something to do with it. I told them it was my energy expended then had them try to imagine what I had done. I gave feedback as to whether their answers were correct and provided written recasts of errors.
The three learners then drew their own graphs and did a three-way swap. They speculated on each other’s activities and then received feedback.

Collocations with the noun ‘contract’.
One learner then came in late. I had the learners ask him questions to draw a graph of his energy use. This went well, with all four learners speaking a lot.
Another learner then came in. I set one learner as only listening and drawing and the other learners to find the latest learner’s energy use in order to draw a graph within five minutes. He was rather taciturn and evasive so it was more difficult than some of them may have thought.
Next I focussed on question forms, particularly verb choice, an issue raised through the learners’ language, then had them fill blanks on the board.
The final task was an extension exercise. I had them rank themselves according to how busy/active they are at weekends. I told them I was looking for more complexity in their language use. This raised a lot of chunks like ‘hit the gym’, ‘check your blind spot’, and ‘develop a film’.
Finally I had the learners read a dreadful textbook dialogue so I could say we used it and cover myself. They then compared their weekend lifestyle to that of the main character in the dialogue.

What would I change?

I’d probably cut the three-way swap in the first independent activity and just have the learners speculate, perhaps giving them individual time limits for turn taking.

Well, it’s pop psychology in the textbook so I might see if I can get them to give each other the Myers-Briggs test. If not, it’s more interesting ways to describe personality.

There are a large number of freelance teachers who won’t teach children at all because it can be more trouble than it’s worth: behaviour problems, parental disengagement, poor institutional support, dreadful training (or rather the lack of it). However, for those of us who are fortunate to find settings in which teaching children is not a painful experience, there is a lot to enjoy: witnessing the development, often at a more rapid pace than adults; engaging questions; and, lest we forget, a source of entertainment.
Here are some resources that may be useful for teachers of children/young learners.
Primary Resources
Twinkl
British Council Young Learners
Don’t forget that it is totally possible to go Dogme/materials light with kids as well, if you have paper, pens and imagination. If the class want to play games, it’s OK – provided they teach you the rules. Giving them ownership can be a bumpy ride – not a lot of kids are used to it so you might need to prime them by having little bits of control increasing incrementally. By the time they get to be responsible for choosing what they learn, it is more interesting (though it can be more challenging to teach).
Higher-ability kids can handle CLIL or project-based learning. Computer programming, geology and probability in games are all fun and useful.
Also, some cool people who teach young learners are:
Rose Bard
Anne Hendler
Tim Hampson